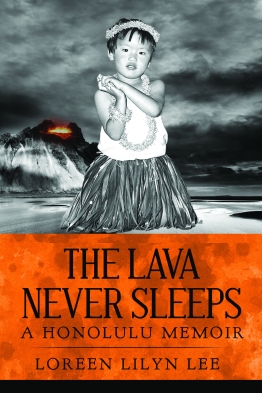 “In The Lava Never Sleeps: A Honolulu Memoir, Loreen Lilyn Lee poignantly details her struggle growing up in a traditional
Chinese family in Honolulu, Hawai’i during the 1950s and 1960s, enduring both emotional and physical abuse. She’ll spend years trying to outrun her demons. Lee gives readers a glimpse into a time and place of transitions, and what ensues is a compelling story of revelation and acceptance, rich in culture and history. By finding the courage to tell her story, Lee has reclaimed her identity and the love for her Chinese and Hawaiian roots.” — Gail Tsukiyama, Author of Women of the Silk and The Samurai’s Garden

“Lyrical, gorgeous, a masterpiece of the place that is Hawai’i.  And painful, insightful, the memoir of a Chinese American girl growing
up in a rigidly patriarchal, deeply sexist society. Lee brings her compassionate eye not only to her childhood but to an intimate
account of her womanhood both shadowed and enriched by her heritage. The Lava Never Sleeps: A Honolulu Memoir will take
its place as an important addition to the shelf on American experience.”—Priscilla Long, Author of Fire and Stone: Where Do We Come From? What Are We? Where Are We Going?

Loreen Lilyn Lee is a Chinese American writer born in Honolulu, T.H. (Territory of Hawaii). Issues of identity intrigue her, and her writing often reflects many cultures and cultural intersections. She has received fellowships from Hedgebrook and the Jack Straw Writers Program. She lives in Seattle, Washington, where she also tutors English and writing.

For updates about readings and other author events, please visit: www.LoreenLilynLee.com

WILLOW BOOK AWARDS JUDGE’S STATEMENT:  The Lava Never Sleeps is a memoir filled with strong prose and an ear for how the texture of a life can create music and meaning.”—Reginald Dwayne Betts